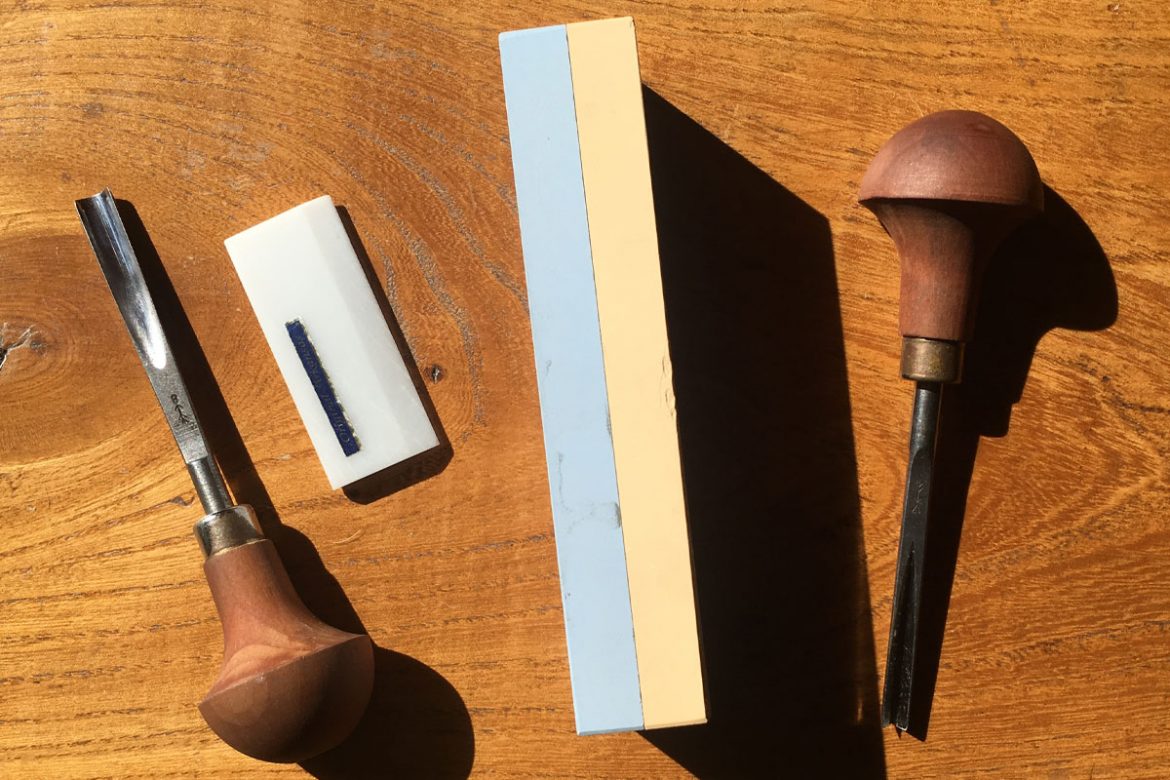 Using a Whetstone! The second exciting instalment on how to maintain linocut carving tools with nice sharpe cutting edges. Sharpening lino cutting tools is an essential little skill that I think it’s worth you trying to learn so that you never have to be parted with your beloved carving friends. In this article I’m going to show you how to use a Whetstone to sharpen your U shaped and V Shaped tools as well as how to remove a bur using a Slipstone.

Whetstones
There are lots of whetstones out there in the market for lino cut artists to choose from for tool maintenance. The stone I use is a Japanese Suehiro sharpening stone. The stone essentially has two sharpening stones stuck together, with one side (blue) slightly more coarse that the other (white) side. 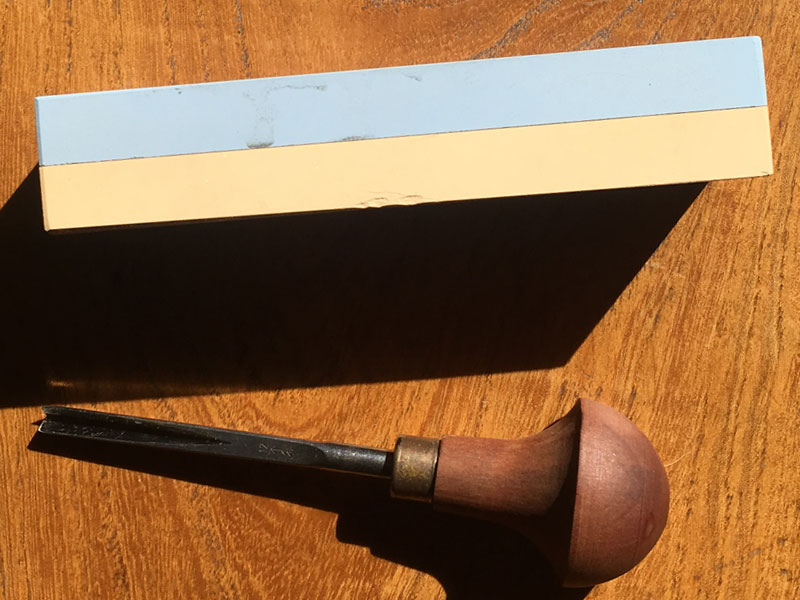 The main difference between whetstones is the grit – the grittier and more coarse stones are good for starting you off when sharpening a blunt blade, and the the smoother stones with a finer grit are better for finishing them off and honing the final cutting edge. 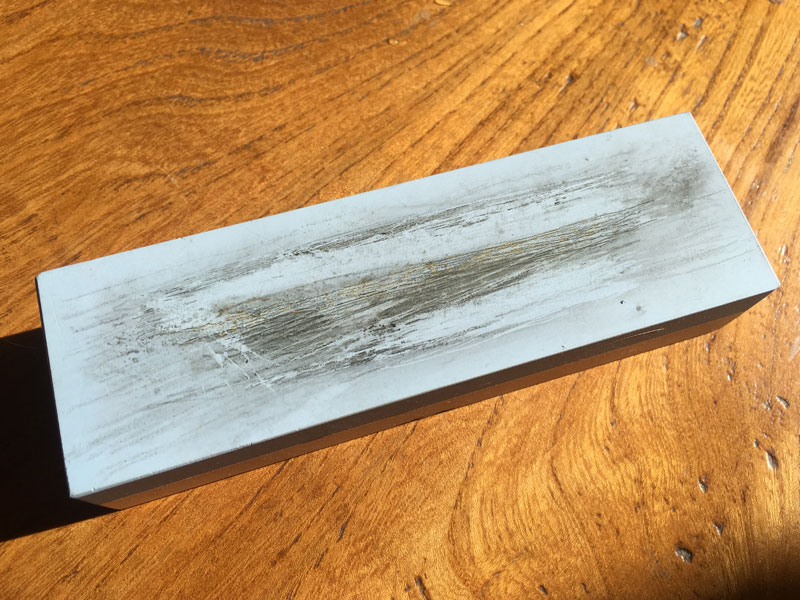 The blue side of the whetstone has a 1000grit and the white smoother side of the stone has a value of 3000grit which I find works very well for me. As Nick Morely points out in his book you probably want a stone somewhere in the 700-1200grit region for initial sharpening. Some people prefer an even finer surface for finishing the honing process with their tools, and you can generally get by quite well with a stone somewhere between 3000-6000grit for the final honing of the tools. 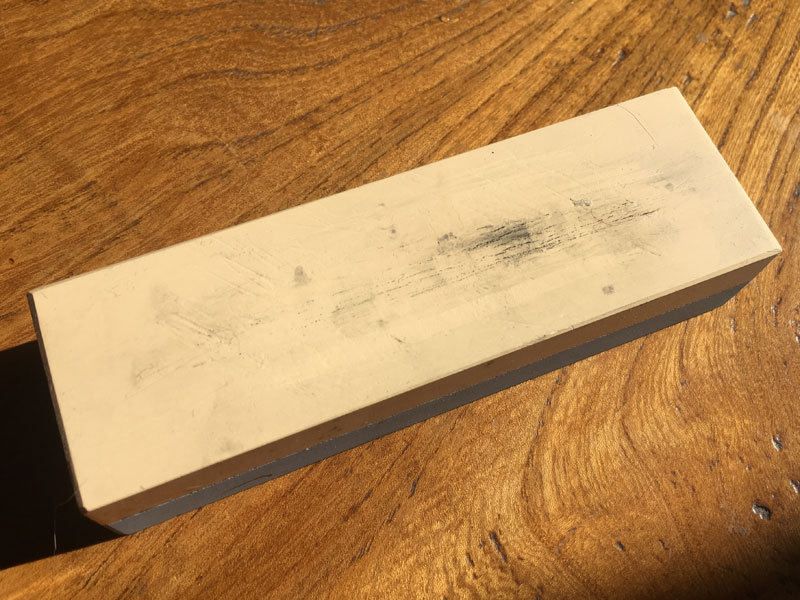 Slipstone
A slip stone is also a little tool I’d recommend you add to your toolbox for sharpening lino cutting tools. They are used for removing a burr. What is Burr? I hear you say… Well, they are a raised edge or build up of metal that you can get on the inside of the cutting edges of the tools as you sharpen them. You want to be able to get rid of these nice and cleanly so a slipstone is handy for doing exactly that.

They have a pointed edge and a curved edge, which means that you can use them for removing the burr from a U shaped or V Shaped tool. 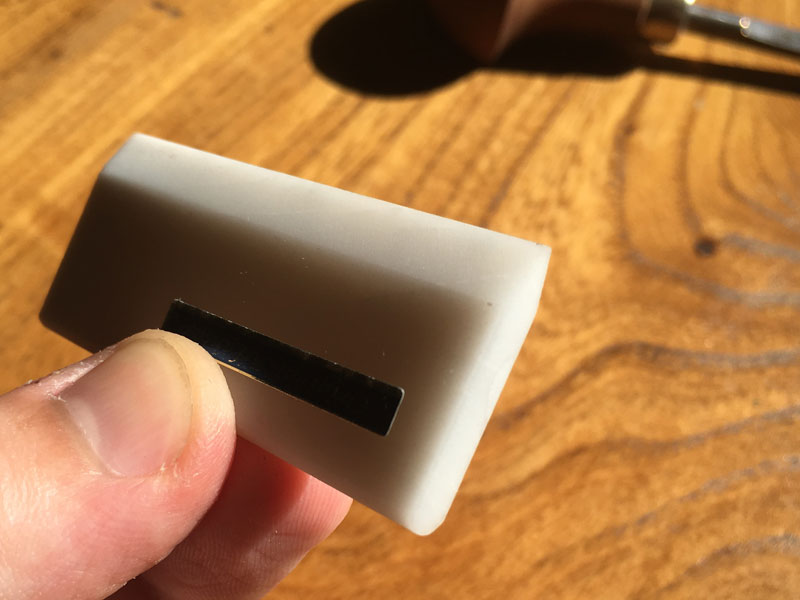 So to start with, don’t use a dry a whetstone, use a wet one! Start by soaking your whetstone in water for 10-15 minutes before you start and keep a little bowl of water near by so you can dip your fingers into it every now and then and transfer some water to the surface of the whetstone in case it starts to dry out.

Now, just like when I described how to hold your tools when using a strop, you need to ensure that you maintain a position whereby the cutting edge of the tool is flush to the surface of the whetstone. Once you have the tool positioned correctly, you slide it up and down the surface of the whetstone. Don’t be too rough and apply too much pressure as you may damage the tool but you don’t want to be too gentle either, you want to sharpen the tool not tickle the stone! 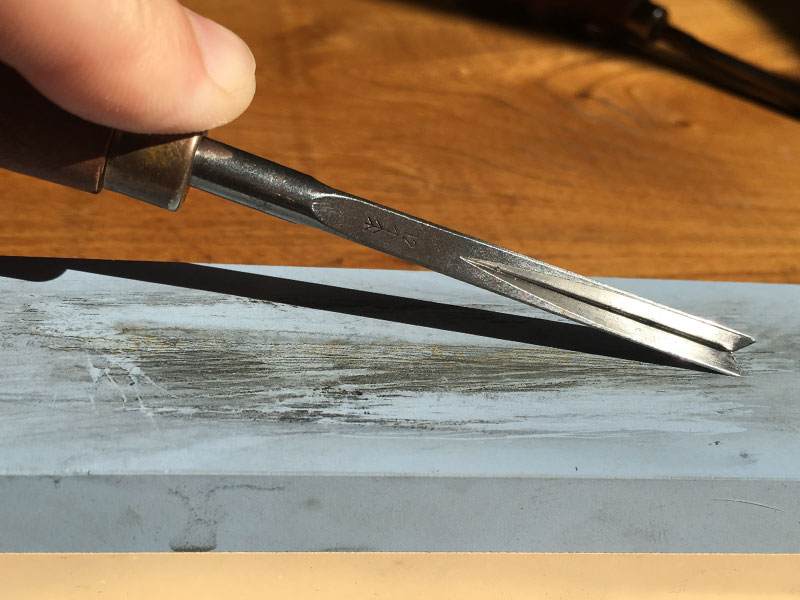 As you work the tool across the surface of the whetstone it will build up a bit of slurry that can form into a paste. The manufacturers of the stone I have say that this accumulation of the fine abrasives should be regularly rinsed off, but don’t worry if it builds up a little like I’ve shown you in the image below – I think that a little of this can actually help the sharpening process. 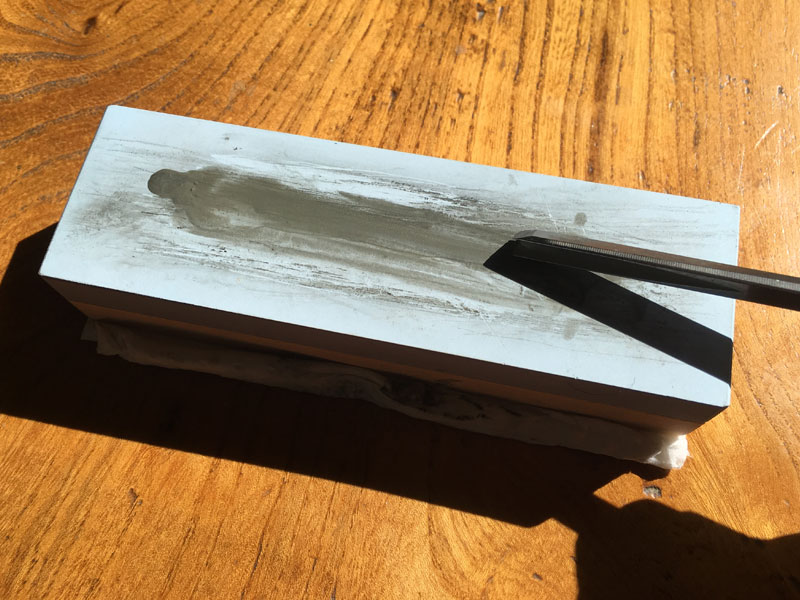 Once you’ve worked the tool from a blunt instrument of carving frustration into a sharp cutting blade that Sean Bean would be proud of you need to use the finer whetstone to hone the cutting edge into a ninja like samurai blade. The process here is exactly the same as the process described above on the more coarse whetstone. 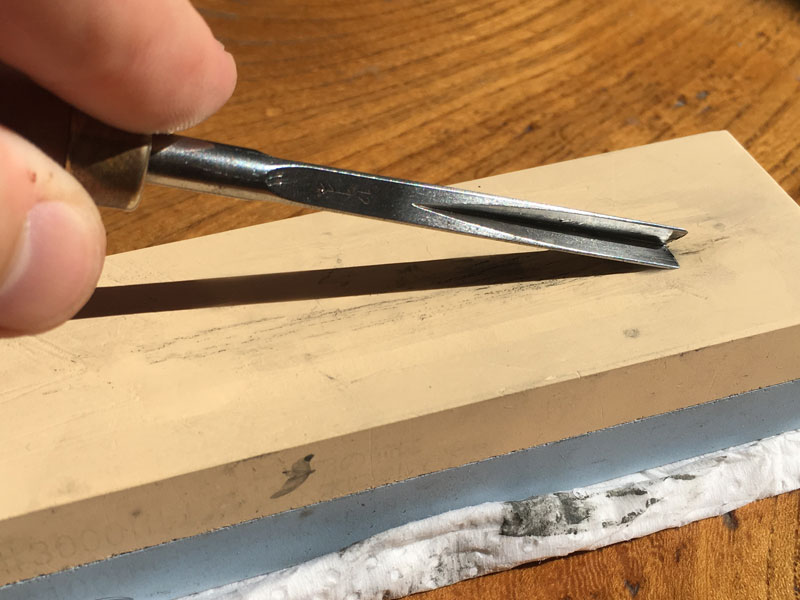 By the time you’re finished you should have a beautiful sharp and well honed cutting tool, perfect for ensuring your linocut strokes are lovely and crisp! 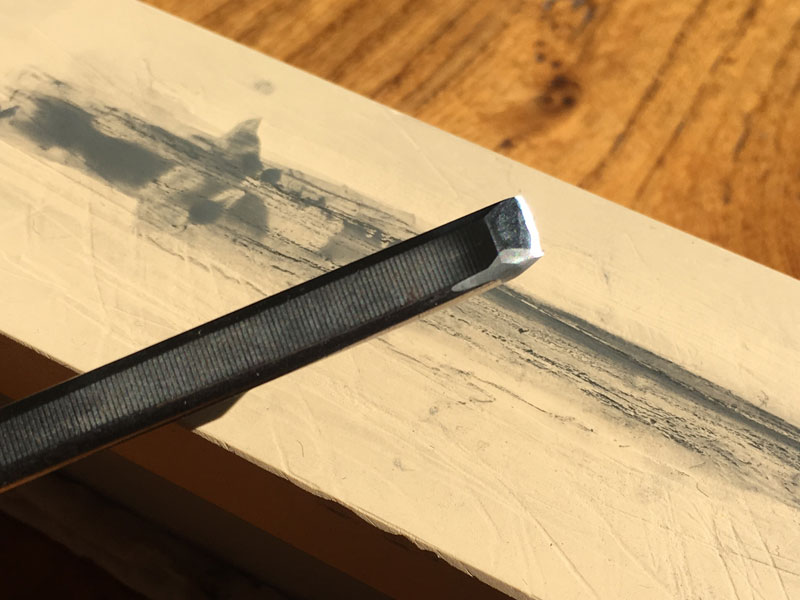 Using a Slipstone to remove a Burr

As mentioned above, during the process of sharpening a tool on a whetstone you can find that the process creates a small build up of the metal along the cutting edge of the tool. This is called a burr and you want to remove it nice and cleanly to ensure that the tool is in best condition for cutting into the lino. You also want to ensure that when you remove it you don’t accidentally damage all the good work you just did when sharpening the tool on your whetstone.

It’s really simple, pick up the slipstone and run the appropriate edge along the inside of the carving tool nice and quickly in one smooth movement. Use the pointed edge for V shaped tools and the rounded edge for U shaped tools. 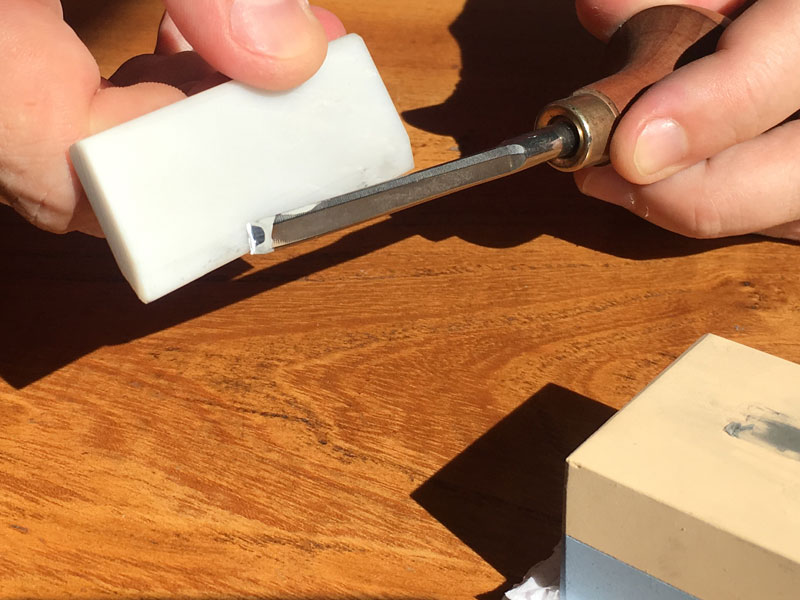 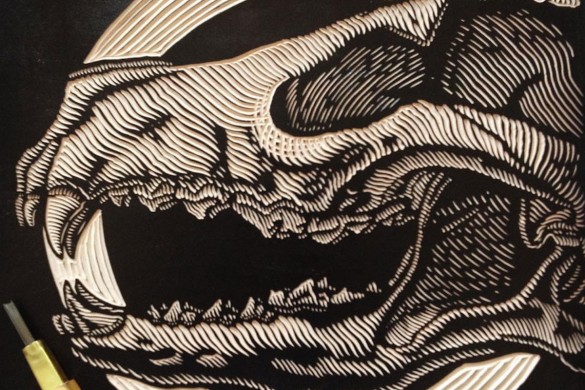 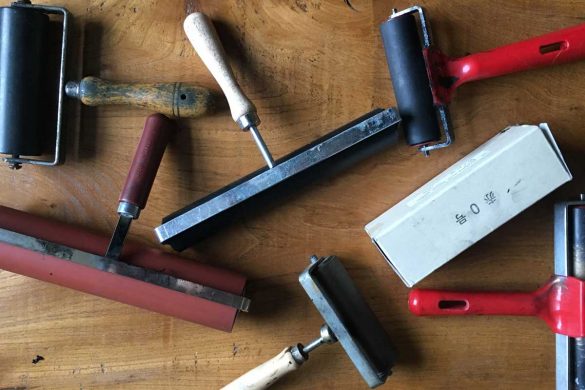 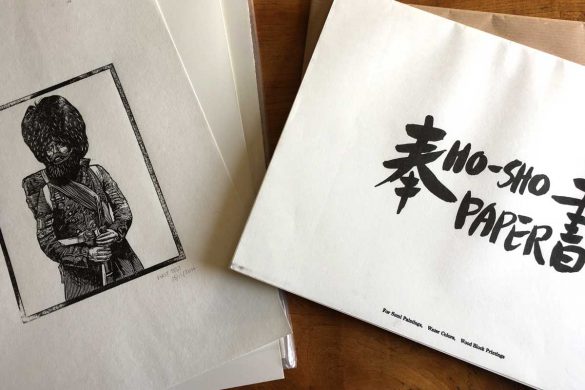 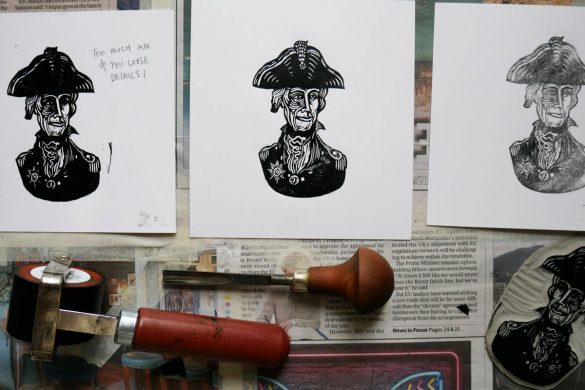 The best lino printing method to get great results 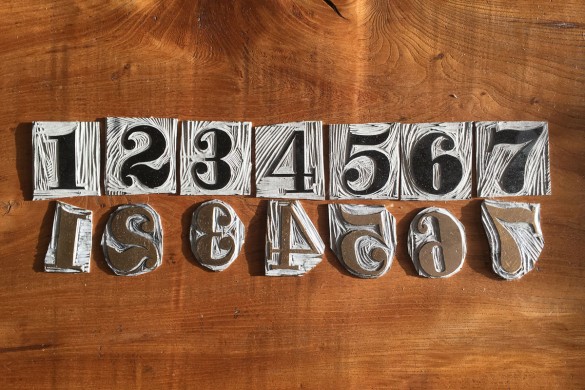 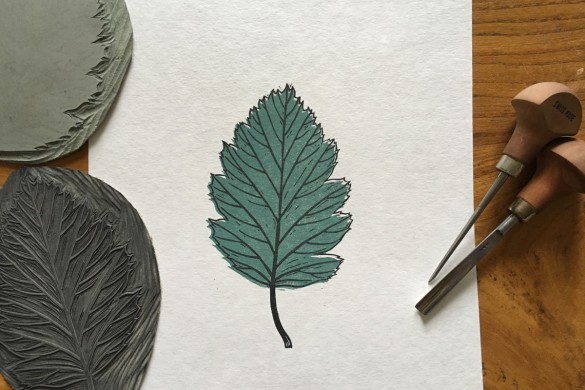 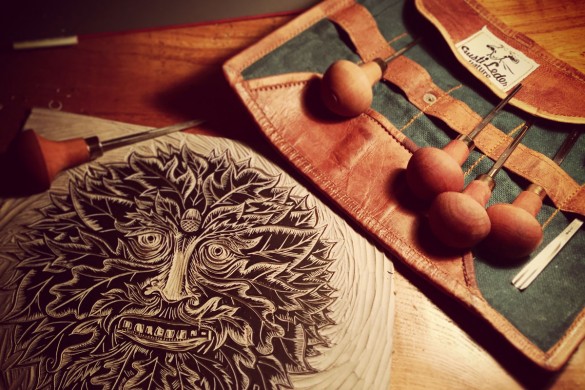 Get tooled up and start lino printing 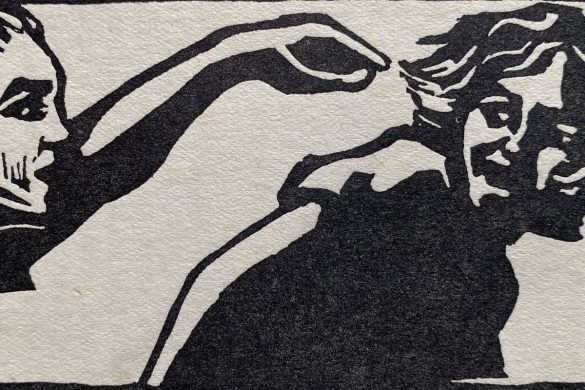 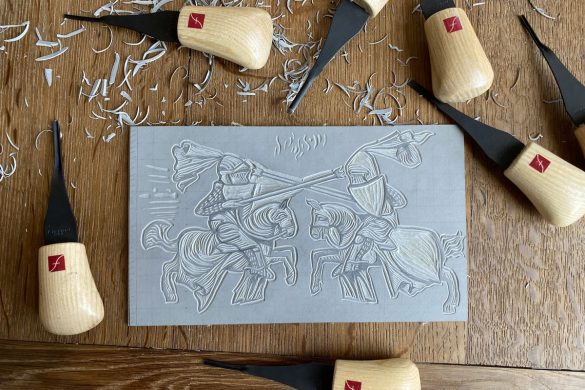 Thank you for all this excellent information.
I am working my way through it.
Wonder if you tell me where you bought your slip stone from; we have a wet stone, but think I should wait until I get the slip stone to try sharpening my neglected tools.

How about sharpening tiny veiners, the 11 and 12? Do you ever use a stone for this? I totally destroyed one of those with a stone.

I have the same question, my Pfeil 11 veined needs sharpening and I cannot figure out how to do it

Hey There, knowing how to approach sharpening the little pfeil 11 tool is a little less obvious, but I tend to use a technique similar to the way I sharpen U shaped gouges in the video, but I also sharpen them by gently pushing the tool forward across the whetstone a few times as well

I was once shown something by a guitar builder for precision chisels that I’ve found handy and cheap for the fine pfeil tools;
Take a small block of hardwood and cut a long consistent groove into the block using the pfeil gouge to cut it (you then Have the exact profile of your tool as a groove in the wood) you can also cut the reverse (holding the tool upside down) onto a corner edge of the block should you want it for deburring.
Then each time you want to sharpen, take a tiny amount of a polishing compound like brasso/silvero and place into the groove you have and stroke it in the reverse from handle the blade (keeping the angles of the blade as you would with a slipstrop or whetstone)
It will easily sharpen with the same profile your blade came with with little chance of you accidentally changing the blades profile.
I’ve been doing it for ages and it works really well and really quickly.
Avoid using too much polishing compound and don’t make it with a softwood like pine as it will swell with the brasso on it which will pinch at the blade while you sharpen. If you add more than one groove to your block, label them clearly as they are easy to mix up by sight.

Very useful, thank you. Just sharpened my tools along with your video.

Thank you for the video- a really helpful guide! If I may ask though please, how do you maintain the whetstone? I have used my whetstone for some time and have now got fine groove lines the length of the stone! Are we supposed to keep the whetstone flat and smooth by sanding it down?!

Good question…. I’m not sure to be honest. I guess you could sand it down with some sand paper?

Hi there, just wanted to say, I liked this blog post. It was practical. Keep on posting!|

Hi there! Would you mind if I share your blog with my facebook group? There’s a lot of people that I think would really appreciate your content. Please let me know. Many thanks|

Everything is very open with a clear explanation of the issues. It was really informative. Your website is useful. Many thanks for sharing!|

Write more, thats all I have to say. Literally, it seems as though you relied on the video to make your point. You obviously know what youre talking about, why throw away your intelligence on just posting videos to your site when you could be giving us something informative to read?|

I was suggested this website by my cousin. I’m not sure whether this post is written by him as nobody else know such detailed about my difficulty. You are amazing! Thanks!|

unless your my long lost cousin I guess this wasn’t written by your cuz but I’m glad you liked the article!

I’m really inspired with your writing abilities as well as with the format for your blog. Is this a paid subject or did you customize it your self? Anyway stay up the excellent high quality writing, it is uncommon to peer a great weblog like this one these days..|

Hi There, thanks for the positivity! This is my passion project. I’m not paid to write the blog and maintain the website. I’m just doing it for the love of the art form and the craft

It is truly a great and useful piece of info. I’m happy that you shared this helpful info with us. Please keep us informed like this. Thank you for sharing.|

Hi! Would you mind if I share your blog with my twitter
group? There’s a lot of folks that I think would really appreciate your content.
Please let me know. Thanks